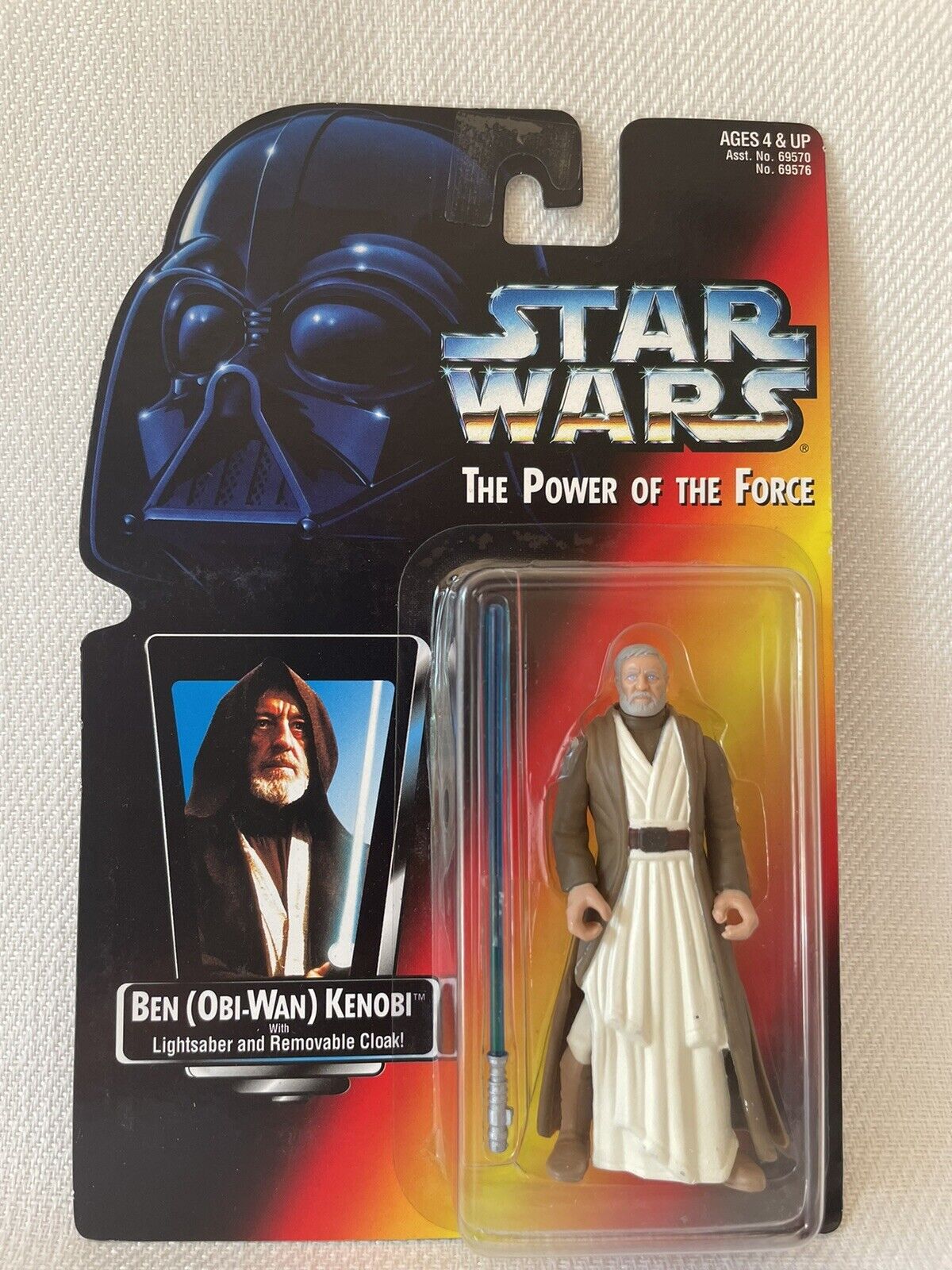 This Ben Kenobi POTF Action Figure has a Blue Lightsaber which is 25% larger than other POTF action figures. This lightsaber is the full length of the character, compared to other versions which have lightsabers that only up to the action figure’s shoulders.

This is from the original release (Wave 1) of the Star Wars POWER OF THE FORCE (POTF) Action Figure series spanning from 1995-2000.

Most fans remember these figures for their exaggerated musculature and wrestler-like stance. There were nine characters in all from A New Hope — including the infamous DARTH VADER figure — packaged in reddish cards with Vader’s helmet as the signature sign of the line. A rather small photo (compared to the vintage cards) was shown on the front of the card, while the back offered a biography of the character and a lineup of the other figures and vehicles.

Slight wear from handling, but is still in very good condition.

Please refer to the photos to view the condition of the product(s).

This is part of an estate and is sold as is.

Please reach out to me with any questions.

Obi-Wan Kenobi, also known as Ben Kenobi, was a human male Jedi Master who served on the Jedi High Council during the final years of the Republic Era. As a Jedi General, Kenobi served in the Grand Army of the Republic that fought against the Separatist Droid Army during the Clone Wars. Kenobi, however, was forced into exile as a result of the Great Jedi Purge. As a mentor, Kenobi was responsible for training two members of the Skywalker family, Anakin Skywalker and Luke Skywalker, both of whom served in turn as his Padawan in the ways of the Force.

Kenobi was born on the planet Stewjon in 57 BBY. He was Force-sensitive, and therefore inducted into the Jedi Order as a child. Raised in the Jedi Temple on Coruscant, Kenobi was assigned to Jedi Master Qui-Gon Jinn. In 32 BBY, Kenobi attained the rank of Jedi Knight by defeating the Sith Lord Darth Maul during the Invasion of Naboo. He also chose to train Anakin Skywalker—the prophesied Chosen One who was destined to destroy the Sith and restore balance to the Force—having promised Jinn who died in the lightsaber duel against Maul.

With the advent of the Clone Wars in 22 BBY, Kenobi adopted the military rank of general in the Grand Army of the Galactic Republic. Kenobi led the clone troopers of the 212th Attack Battalion alongside Clone Marshal Commander CC-2224 throughout the galaxy-wide conflict, achieving multiple victories over the Confederacy of Independent Systems. In 19 BBY, Kenobi killed General Grievous during the Battle of Utapau, effectively ending the Clone Wars. He survived the purge of the Jedi Order, which resulted from the machinations of the Sith Lord Darth Sidious. After discovering that Skywalker had turned to the dark side of the Force, becoming Sidious’ Sith apprentice under the name of Darth Vader, Kenobi defeated his former Padawan on Mustafar and exiled himself to the Outer Rim planet Tatooine as the Galactic Empire rose to power.

Adopting a hermit lifestyle as “Ben Kenobi,” he watched over Vader’s son, Luke Skywalker, whose Jedi training Kenobi began in 0 BBY. In the same year, Kenobi encountered Vader aboard the first Death Star, where he sacrificed himself to ensure that Luke and his allies escaped from the Sith Lord. In death, Kenobi became one with the Force which allowed him to continue guiding Luke throughout the Galactic Civil War. In 4 ABY, Kenobi reunited with his former student, Anakin Skywalker, who died destroying his Sith Master in order to save his son. Kenobi was remembered as a legendary Jedi Master during the rise of the New Republic; Ben Solo, the son of Luke’s twin sister, Princess Leia Organa, was named after Kenobi. Solo’s turn to the dark side left Luke disillusioned with the Jedi Order’s legacy, and he held Kenobi responsible for Anakin’s transformation into Vader. 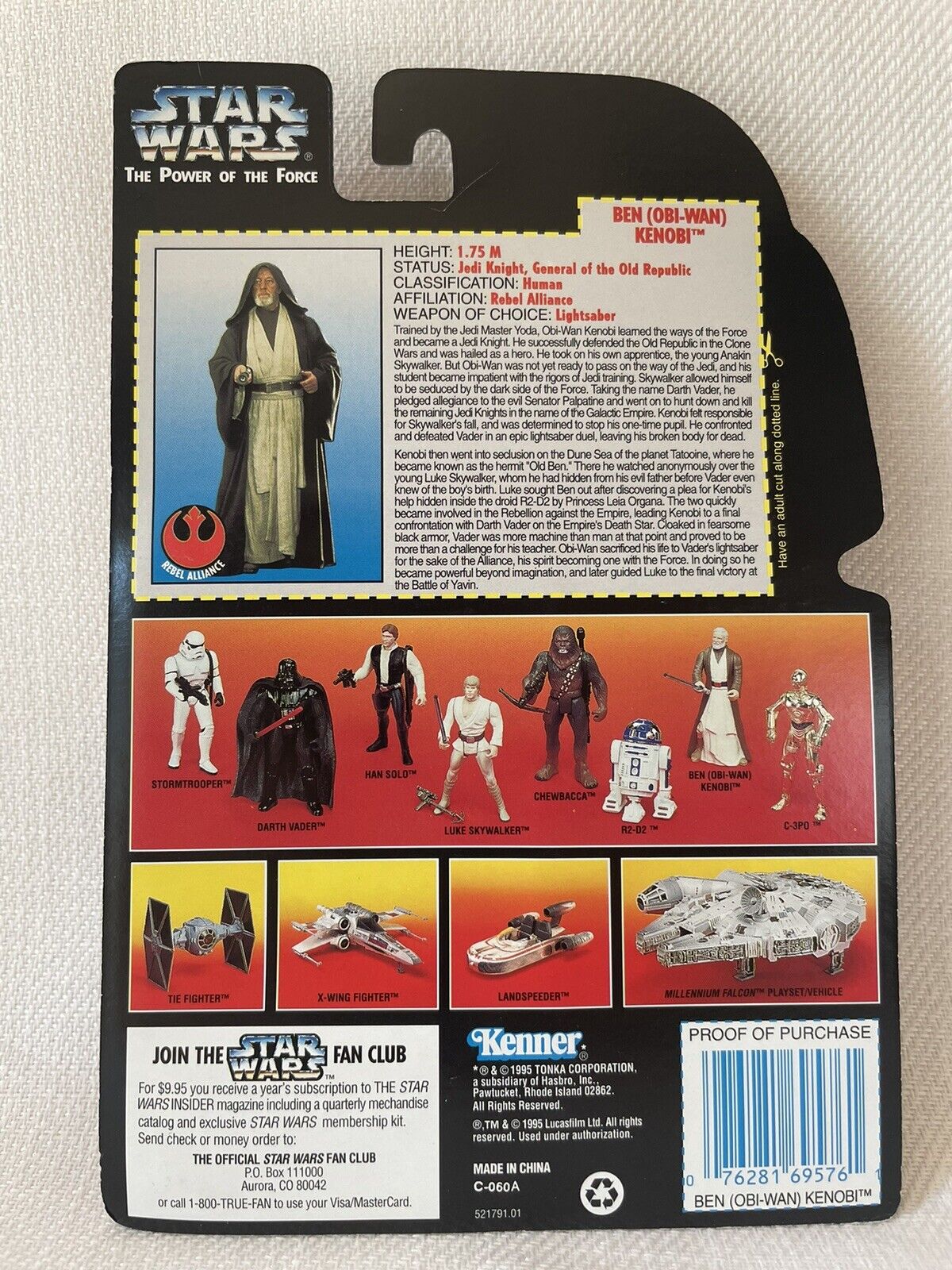